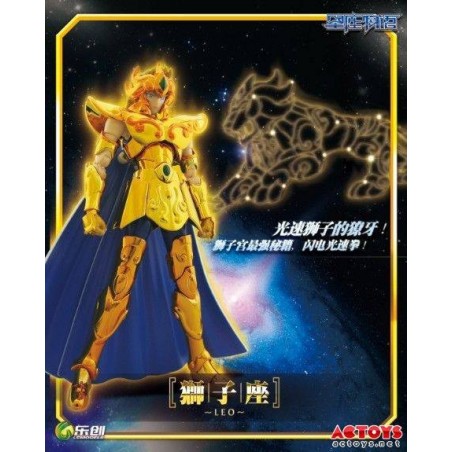 Characteristics
Artistic direction Cyril Marchiol TSUME
concept art Sculptor Muhammet Ay
Painters Guillaume Hémery & Mickael Gros
Technical engineering Muhammet Ay, José Ku Chio Lu
Dimensions H: 32 cm - L: 33 cm - D: 34 cm
Weight 5 kg
2017
Aiolia is the Golden Knight of the Lion, and the brother of the Golden Knight of Sagittarius Aiolos, considered for 15 years as a traitor. Particularly devoted to the Sanctuary, the Grand Pope sends him to eliminate the Bronze Knights and Saori Kido. But he rallies his cause when the latter proves to him that she is indeed the reincarnation of Athena. As fierce as the animal with which he wears the armor, Aiolia is a relentless fighter with techniques as devastating as they are swift. We depicted him performing the Lightning Bolt (ラ イ ト ニ ン グ ・ ボ ル ト in Japanese) which concentrates his cosmos in his fist before hitting his opponent. His right hand is augmented with a translucent PVC piece to reproduce the effect of the Lightning Bolt. To increase the realism, we have integrated an LED based lighting system in the fist for a striking effect! The pose, with obvious dynamism, is inspired by the fight between Aiolia and Seiya in the Lion Temple during the Battle of the Sanctuary. We also find in the box a second head to expose Aiolia under the influence of the fate of the Grand Pope, in addition to the standard head. The base takes up elements of the Lion Temple, such as the Greek columns, and bears the scars of the fierce combat that took place. Aiolia du Lion HQS by Tsume is a balanced and dynamic piece that will perfectly complement your HQS by Tsume Saint Seiya collection!