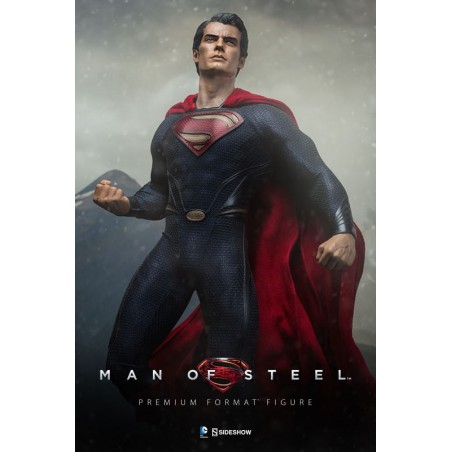 Making his debut in Zack Snyder's 2013 film Man of Steel, and returning to the big screen for Batman V. Superman: Dawn of Justice, Sideshow is proud to present the Man of Steel: Superman Premium Format Figure.

The Superman figure is fitted with a hand tailored replica of his distinctive new suit, with the Kryptonian symbol for hope emblazoned on his chest, and a fully poseable fabric cape. Featuring a stunning likeness of Henry Cavill as Superman, the artisans at Sideshow Collectibles crafted this outstanding Man of Steel figure in highly detailed 1:4 scale. This Superman statue is composed of high quality PVC, fabric and polystone.

The long-awaited re-imagining of pop culture's most recognizable superhero is here, the Man of Steel statue will truly "give the people of Earth an ideal to strive towards."

Superman action figure features a custom replica of his distinctive new costume, with the Kryptonian symbol of hope emblazoned on his chest and a fully articulated fabric cape. Featuring a stunning likeness of Henry Cavill as Superman, the artisans at Sideshow Collectibles have designed this exceptional 1:4 scale, highly detailed Man of Steel figure. This Superman statue is made of high quality PVC, fabric and polystone.

Man of Steel, or L'Homme d'acier in Quebec, is an American-British movie directed by Zack Snyder, released in 2013. Based on the DC Comics character Superman, the film is a reboot that depicts the origins of the superhero

Written by David S. Goyer and produced by Christopher Nolan, Man of Steel stars Henry Cavill in the title role, with Amy Adams as Lois Lane, Michael Shannon as General Zod, Diane Lane and Kevin Costner as Martha and Jonathan Kent, Laurence Fishburne as Perry White and Russell Crowe as Jor-El. The film also presents a universe where the iconic heroes of DC Comics can coexist and reunite in possible future sequels

Development of the film began in 2008, after Warner Bros. Pictures decided not to make a sequel to Superman Returns (2006), opting to reboot the franchise based on concepts developed by DC Comics writers, editors and directors.

In 2009, a court ruling allowed the family of Jerry Siegel (co-creator of Superman with Joe Shuster) to regain their copyright on Superman and his origins. The ruling also stipulated that Warner Bros. owed no additional royalties to Siegel and Schuster's heirs on previous films, but that if it did not begin production of a film by 2011, the heirs could sue for lost revenue related to an unproduced film.