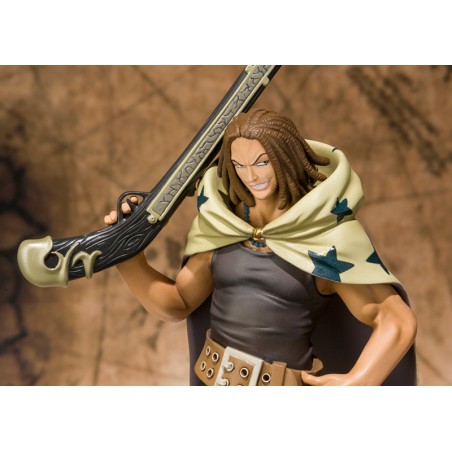 Yasopp is the Sniper of the Reds Crew, and one of its officers. He is the father of Usopp and was the husband of Bankina. He is originally from the Village of Sirop, and it was on this island that he met Shanks.

His appearance is very similar to Usopp's except for the nose and the hair color (the shape of the nose being a hereditary character of Usopp's mother).

Indeed, he has blond hair while his son has black hair.

Twenty years ago, Yasopp had the same hair as Usopp, as well as a thinner body than now.

When Yasopp was first seen at Fuschia, he was wearing a dark blue shirt, dark green pants that went down to his calves, blue shoes with buckles, and on his forehead a headband with his name written on it.

In his last appearance, at Marine Ford, he seems to have become more muscular and has changed his style of dress.

He wears a black t-shirt, gray shorts, boots, a bag attached to a large belt and he has a tattoo on his right arm with his name written on it.